So you're thinking about becoming a Part-Time or Full-Time Officer? And now you're wondering what changes you can bring to Sussex?

Over the years, our Officers have brought about change that has had a lasting effect on Sussex, here are some examples below:

The fund helps to support students who are struggling to cover costs such as printing, textbooks, dissertation binding and academic trips. Students can access the fund through the University’s Student Life Center.

This scheme is run by the University’s Housing Services team, and allows the University to act as a guarantor for students who do not have a UK homeowner able to provide this service for them.

The Food Waste Café was introduced in 2016. The aim of the project is to use food that would have otherwise gone to waste, and with the help of the Real Junk Food Project and their pop-up van, create a delicious menu for everyone to enjoy. As of April 2017 there have been two cafés, serving over 250 people and raising over £250 to keep the project going.

"I was the elected Welfare Officer 2011-2013 as a full time elected officer. It was an honour to represent student’s views and needs within the student’s union, to university management and within the wider Brighton & Hove community. There are many transferable skills I learnt during my time as an elected officer that I still use now, such as; project management, working effectively as part of a team, campaign management and event organising. Since my time as an elected officer I have worked both in the charity sector and public sector of Brighton & Hove – I have also been a Trustee of a charity and set up my own membership organisation.

I would encourage anybody with a passion to represent students and improve the lives of students to nominate themselves! Sometimes all it takes is an idea…..I designed the Buddy Scheme and put in on my manifesto in 2011!"

"Being an officer helped me grow as an adult and gave me the confidence I could achieve almost anything, which is pretty handy when it comes to job hunting. It also taught me some more practical stuff. I am currently a management consultant and I can definitely tell that it made me develop some invaluable organisational and stakeholder management skills that I use everyday in my job. Last but not least I found five really good friends in my fellow sab sisters and at the end of the day I think that's what really matters."

"As an international student, you've got a different perspective on different aspects of university life, because you've not just moved from a different city, you've moved to a different country. That in itself comes with challenges that home students aren't aware of. Sussex is a great campus with students from across the globe and the Students Union should be representative of that"

"The past 6 months have been some of the best of my life, and I would recommend running as an officer to anyone and everyone. It is one of the best graduate roles I could have ever asked for, and I learn so much every day and get to spend it with other incredible and inspirational people"

Take a look at some of the Full-Time Officers Wall of Wins: 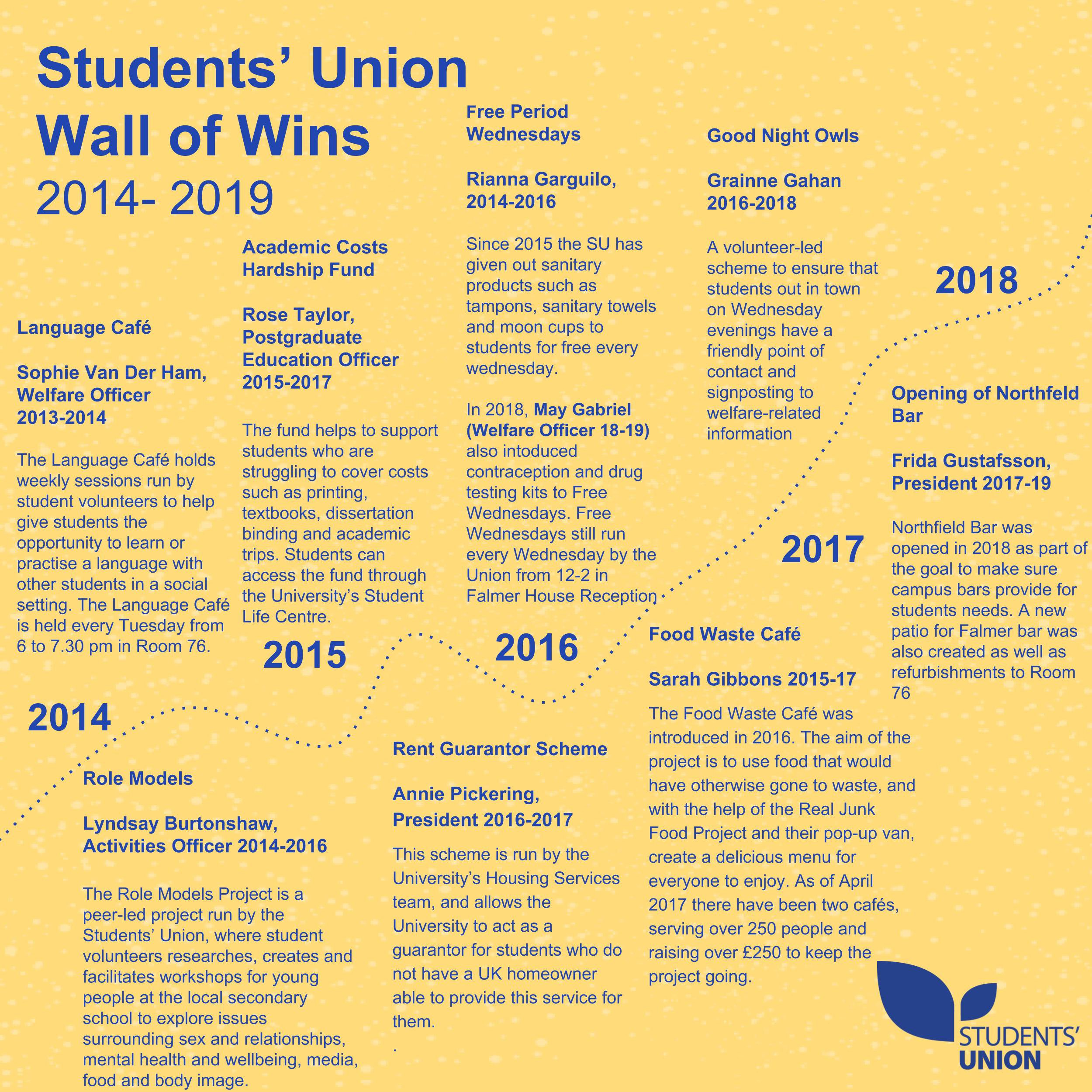 These are only a handful of Wins, Officers achieve a whole load of their aims while in Office. On the next Wall of Wins, it could be you mentioned too!